Last Summer, Mamadou Ndiaye was driving home from a job in Carmel, Indiana. As a professional photographer and filmmaker, he has to travel around for work and this day was no different.

As he was driving along, a deputy from the Hamilton County Sheriff’s Department pulled him over in a routine traffic stop. Ndiaye was driving on a suspended license due to a misunderstanding. It was an innocent mistake. The deputy made the decision to handcuff Ndiaye and asked to search his car. Ndiaye obliged and was confident that the deputy would find nothing as he had nothing to hide. He’s never been in trouble with the law and as he puts it, “I’m not a criminal.”

That was when the deputy found a small bottle of CBD oil.

Ndiaye was not only charged with a driving offence but had now been charged with possession of marijuana. This meant that he was facing jail time and a $1000 fine. Ndiaye had bought the bottle as a dietary supplement to help his hair growth, and now he was facing imprisonment and everything that goes with that.

In Indiana, the law on CBD oil is murky, at best. Technically, CBD oil is illegal, but shops still sell it and it is easy to get your hands on. Fortunately, both the prosecutor and the judge decided to dismiss the case. But an innocent man was put through months of stress and worry, just because he wanted to grow his hair.

This is just one story of people being penalized for using CBD oil.

What Is CBD Oil? 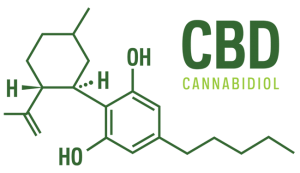 The Washington Post called CBD oil the ‘new ‘it’ drug’.

As most of our readers will know, CBD oil is a product derived from the cannabis plant. It utilizes the CBD compound found in cannabis instead of the famous THC compound that gets you ‘high’.

CBD oil is a completely natural supplement that has amazing medicinal benefits and very few side effects. It has been proven to treat a number of serious illnesses including epilepsy, cancer and Alzheimer’s.

Unfortunately, because it is from the cannabis plant it is misunderstood and distrusted by a lot of people, and is still illegal in some states in the U.S.

Where Is It Legal? 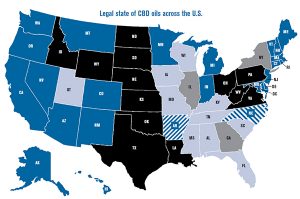 This is a question that gets asked a lot and the answer is quite complicated, so we’ve broken it down for you to make it easy to understand.

First of all there are two different types of CBD oil – hemp-derived and marijuana-derived.

Hemp is a type of cannabis plant. It has very low levels of THC and won’t cause any psychoactive effects if consumed. It has been used for thousands of years for medicine, materials and agriculture.

Hemp-derived CBD products are legal to purchase, import and consume in all 50 U.S. states.

The legislation around marijuana-derived CBD products is a lot more complicated. Every separate state has its own legislation that governs the legality. This can range from it being completely legal to prohibited.

The law is subject to change and the legality in certain states could be different when you read this, so it is always worth doing your own research on the legality of CBD oil.

States that allow all cannabis products for recreational use (meaning you can purchase and use it without a prescription from your doctor): 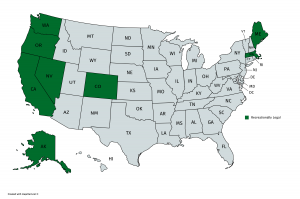 States that allow marijuana products for medicinal use (not exclusive to CBD oil): 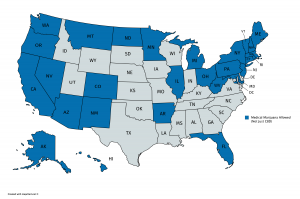 States that allow CBD products only for medicinal use(but not other types of cannabis): 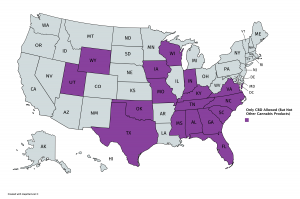 States that prohibit the use of CBD products: 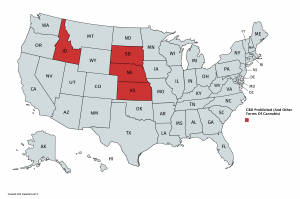 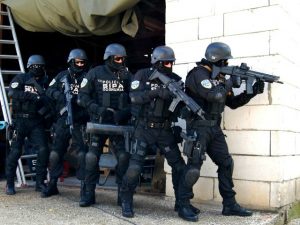 Indiana is probably the state that best epitomizes the confusing legislation of CBD oil. In the summer of 2017, there was a raid on grocery store, Fresh Thyme and the Indiana State Excise Police confiscated thousands of pounds worth of CBD oil.

The story, exposed by WHTR, sent a ripple effect around the state. State law in Indiana says that industrial hemp products that contain less than 0.3% THC don’t fall under the same category as marijuana. So in Indiana, many people assumed CBD was completely legal. Health supplement shops across the state were selling the products and lots of Indiana residents were talking about how effective it was. CBD oil was selling well.

Until the raid on Fresh Thyme.

People that used CBD oil relied on Fresh Thyme to buy the product. So they were completely shocked when they found the shelves were empty. Other stores around the state stopped selling CBD oil because they were scared of getting raided as well.

The situation caused a debate between politicians, patients and law enforcement.

The U.S. Drug Enforcement Agency considers CBD a Schedule 1 drug, the same as heroin and LSD, whereas the FDA say that products that contain CBD cannot be sold as dietary supplements. Technically, in Indiana, industrial hemp products are not illegal so, hemp-derived CBD, should be legal.

This confusion in legislation is the reason for misguided raids and a lack of availability for patients. The fact that CBD oil – a product which has amazing, natural benefits for so many ailments and very few side effects – can be classed the same as heroin is unbelievable. It is a waste of law enforcement’s time and resources and is a travesty for patients who rely on it.

The Future Of Legality 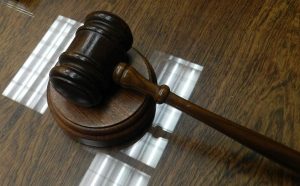 As you can see from the list above regarding the legality of CBD oil, things are slowly moving in the right direction. The amount of research being undertaken is growing every year and the results are starting to show. Companies like GW Pharmaceuticals are creating CBD based products that are catching the attention of the Food And Drug Administration (FDA).

Unfortunately, the FDA still considers CBD an unapproved new drug. In spite of this, they generally aren’t enforcing their stance, except for sending warning letters to CBD product manufacturers. Supplements In Review propose three reasons that would explain the FDA’s inactivity.

Hopefully, the involvement of the large pharmaceutical companies will encourage the FDA to change its stance on CBD for the better.

If it wasn’t for the history between the government and marijuana, CBD oil would be the most popular drug in America. From an objective standpoint, CBD oil has many amazing medicinal benefits, treats a lot of ailments that are otherwise difficult to treat and barely has any side-effects. But because it is tarred with the same brush as marijuana, it isn’t that simple.

With the increase in research and the more people using CBD oil to effectively treat their symptoms, eventually it will lose its stigma and hopefully become completely legal across the U.S. and Canada.

Ironically, where CBD Oil is completely legal, it is regulated better and therefore made safer for the patients. So the federal government could put their worries about CBD oil being harmful to rest by legalizing it.

Why Big Pharma Is Panicking Over CBD Oil's Proliferation

What Is CBD Oil?